This interview was originally published on N-Europe on 19th December 2007.

Back in October, Sydney-based developers Nnooo declared the development of a new game called Pop. Similar to target-shooting games such as Duck Hunt and Link’s Crossbow Training, Pop offers a wide range of modes and powerups and is intended as a more casual pick-up and play game than a Zelda-esque adventure.  We spoke to lead developer Nic Watt from Nnooo about the upcoming WiiWare title.

Q: Can you tell us a little bit about the history of Nnooo and how you got together as a games development studio?

Nic Watt:  Nnooo is a brand new games studio formed in July 2006. We have staff with over 8 years of experience in games development. Nnooo was formed when my partner and I moved to Australia which forced me to leave EA and ultimately form my own games studio.

Q: Can you tell our readers about your new WiiWare game, Pop?

Nic:  Pop is designed to be initially simple to pick up and play which with practice can reveal additional complexities and subtleties. At its most basic Pop is about popping bubbles which appear from one side of the screen (e.g. the bottom) and move towards the opposite side. These bubbles will be of varying size, colour and speed with small bubbles scoring more points and big bubbles scoring more time. The player must, therefore, try to score as many points as he or she can without running out of time.

Biffy Clyro would have a field day.

Skilled players will learn that popping the same colour sequentially will increase their score by: adding bonus points for each bubble in their ‘chain’, gain multipliers which further increase the score, gain bonus time which helps them stay alive longer. There are also powerups, a pump up mechanic and multiplayer modes. The pump up mechanic allows the player to press and hold the A or B button on a bubble and then pump the Wii remote up and down to pump up the bubble. When it is fully pumped up he or she can then release the button and the bubble will detonate creating an expanding shockwave. Any matching coloured bubble this shockwaves hits will destroy it, creating a chain and increasing the players score. The player can also use this to drag bubbles around, such as powerups, to locate them in better places.

Powerups include: Nuke which, like pumping up, creates an expanding shockwave that destroys any matching coloured bubbles as it expands; Torch which will make the screen black and only the player who activated it can shine a torch light on screen (using the Wii Remote) to reveal the bubbles; Shock will allow one player to make his or her cursor electrified and any other cursor it touches will become stunned making them unable to pop bubbles for a short duration; or Time warp which will slow time down making it easier to pop bubbles, however, only the player who activated this powerup gets the benefit while the other players must sit and watch until it expires. Pop is built up of waves with each one having different coloured bubbles, and varying speeds. Some waves will be easy with slow moving, large bubbles while others will be hard with fast moving, small bubbles. Some waves are broken by a bonus round which will challenge the player(s) to mini game which will reward additional time and points.

“Nnooo was formed when my partner and I moved to Australia which forced me to leave EA and ultimately form my own games studio.”

Q: The game seems very relaxed and without objectives. Will it contain some sort of story mode or is it going to be pure, arcade-y, highscore focused fun?

Nic:  Pop is designed to be an immediate pick up and play game which focuses on scoring and as such there will be no story mode.

Q: How many difficulty levels and modes will there be, and could you tell us a little more about these?

Nic:  There are 5 different modes: Training, where you can learn the fundamentals of Pop; Normal which is the default and standard play mode; Advanced which while similar to Normal is harder and challenges the player to try maxing out his or her score as quickly as possible; and finally there is bonus mode with will take a random selection of bonus rounds and task the player(s) with playing through them to score the most points.

Q: How many types of bubbles are there, and what do they do?

Nic:  Depending on the wave there are anywhere between 2 and 6 colours of bubbles. All bubbles of the same size will reward the same points and time (dependant on the state of the game) however as mentioned above: small bubbles reward more points; large bubbles reward more time; and sticking to the same colour of bubble within a wave will create a chain which in turn increases your score and time more so than popping different coloured bubbles. 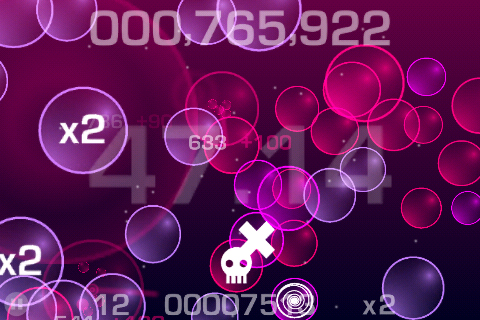 Q: Will there be any obstacles that thwart our attempts to pop bubbles, such as enemies or traps?

Nic:  There are no enemies or traps. However there are bad bubbles which will penalise the player. Missing a bubble will break the players chain, remove any multipliers and deduct an amount of time from the timer, popping X bubbles works in exactly the same way and popping a skull bubble will wipe you chain tally completely (very bad).

Q: Nintendo has just released the Wii Zapper, which currently allows us to go Scarface on zombies and Goron crotches. Do you have any plans to incorporate the Zapper control scheme into Pop, or any other control schemes?

Nic:  We have tested Pop with the Wii Zapper and its current configuration will support not only the Zapper but any 3rd party gun peripheral. We do not plan on supporting any different configurations other than the press A or B to pop bubbles and pumping up by moving the controller up and down.

Q: Will Pop take advantage of WiiConnect24 in any way?

Nic:  Yes. Players can choose to have results of their games in Pop sent to anyone on their Wii friends list as well as being sent to their own Wii. This way you can keep track of your family and friends progress in Pop.

“We have tested Pop with the Wii Zapper and its current configuration will support not only the Zapper but any 3rd party gun peripheral.”

Q: How do you feel this offers more than the Duck Hunt-esque game in Wii Play?

Nic:  We feel Pop differs from Duck Hunt in many ways, not least the scoring mechanic. In Pop 4 players can play simultaneously either competing with or helping each other. We have the pump up mechanic and a large variety of powerups (some of which have already been mentioned).

Q: How easy is the Wii to develop for?

Nic:  Like any games console it has its complexities particularly designing for the Wii Remote. However Nintendo have released a great tool set and SDK (software development kit) which gives us a load of examples we can look at and learn from. All in all we have found the experience enjoyable and pretty easy to get to grips with (although like anything it has had its moments of frustration!).

If it’s anywhere near as therapeutic as bubblewrap, I’m sold.

Q: How attractive is WiiWare to small, independent developers, and do you think it will take off?

Nic:  I think it is very attractive for small, independent developers. Being free of the cost of DVD releases means that we can spend our budget on making gameplay and get it direct to the consumer. In turn we get direct access to the revenues and can use that to make better and bigger games. I am sure WiiWare will be a massive success and ultimately the future of most modern forms of entertainment are through direct, internet based, distribution (what’s more it is also a lot more environmentally friendly what with no shipping, DVD production, shop electricity etc!).

Q: What attracted you to WiiWare rather than the PlayStation Store or the Xbox Live Arcade?

Nic:  The creativity you can apply to a Wii game just with the new freedoms the controller gives you was a massive attraction. Nintendo’s attitude to new developers was another, they were just so approachable and helpful it really made us feel able to create great games and get them out to the Wii’s fanbase.

“I think [WiiWare] is very attractive for small, independent developers. Being free of the cost of DVD releases means that we can spend our budget on making gameplay and get it direct to the consumer. In turn we get direct access to the revenues and can use that to make better and bigger games. I am sure WiiWare will be a massive success and ultimately the future of most modern forms of entertainment are through direct, internet based, distribution.”

Q: What is your relationship with Nintendo, being one of the very first third-party WiiWare developers? Do Nintendo offer help and resources?

Nic:  We have the same access to Nintendo’s resources as any developer for Wii (including DVD and WiiWare developers). We do not have any special treatment or relationship and are subject to the same rules and strict testing as everyone else. It has been a great process but being on board first always has it’s hurdles as little things change as you go through the process, we wouldn’t change it for the world though.

Q: What future developments do you have in mind once Pop is released? We’ve noticed that you currently have a game called ‘Blast’ on hold.

Nic:  We have several game ideas we would like to work through with Pop being the first as we wanted to ensure we had a title we could achieve and use it to learn the most from the Wii Hardware. Blast is indeed on hold, it was intended as an XBLA game so when we were approved for WiiWare we made the tough decision to put it on hold. Our aim is to come back to it in the future and incorporate more Wii specific elements to it.

Q: And finally, did anyone, at any point in the development, begin singing “I’m Forever Blowing Bubbles”?

Nic:  Not that I have heard!

Thanks for answering our questions!

Nic:  Thanks for taking time to have a look at Pop. We would love to provide you and your readers with more information about Pop and our other games in the near future!