This interview was originally published on N-Europe on 11th May 2008.

Yesterday, Nintendo unleashed their plans for the US WiiWare launch: six downloadable delights, including LostWinds, Final Fantasy and Defend Your Castle. We recently caught up with XGen Studios’ President, Skye Boyes, and Senior Artist Taylor Schaerer to talk about their colourfully chaotic reimagining of the beloved Flash game.

N-Europe: For the three people out there who haven’t played it, can you briefly explain Defend Your Castle to us?

Skye Boyes: Defend your Castle takes place on a grassy plain surrounded by invaders. You are the commander of your Castle, and must Defend it by picking up invaders and flinging them mercilessly to their death. During nightfall, you’ll have the opportunity administer repairs and purchase upgrades and fortifications for your castle.

N-E: How did the concept for Defend Your Castle first come about, did your team have any inspirations?

Skye: Defend your Castle evolved from the simple, endlessly fun act of throwing; design was largely a question of how to build a game around this addictive central mechanic. The game captures our philosophy well; innovative design, low barriers to entry, and satisfying gameplay in both short and extended play sessions.

The art style is like a child with unlimited imagination let loose with Crayola and a bucket-load of random material.

N-E: How will Defend Your Castle on WiiWare differ from the PC version? How would you convince someone sitting on the wall to buy this as opposed to playing the free Flash version?

Skye: By taking the game back to the drawing board, we were able to improve upon the original design as well as leverage the unique capabilities of the Nintendo Wii. A new unit type, 4 player cooperative multiplayer, more massive waves of invaders, and significant changes ‘under the hood’ to enhance and extend gameplay are just a few of the improvements over the original. Developing for the Nintendo Wii also allowed us to spawn more massive waves of invaders in later stages and include enhancements such as lighting and particle effects.

N-E: What modes will be available to us, and could you explain them to us?

“By taking the game back to the drawing board, we were able to improve upon the original design as well as leverage the unique capabilities of the Nintendo Wii.”

N-E: How will co-op work, is it offline, online or both?

Skye Boyes: Despite the lack of online support, the Multiplayer in Defend your Castle is my favorite feature. The cooperative jump-in/jump-out style, the competitive elements and dynamic difficulty adjustment all make the game a lot of fun to play with friends. If you’re playing DyC by yourself while waiting for a few friends to show up, for example, anyone can pick up a Wii Remote as they arrive and start playing. If you have to answer the door, put your Wii Remote down; the game will detect one less player and automatically adjust.

We’ve also introduced a new competitive element to multiplayer called “King of the Castle”. If you have the highest score at the end of the round, you’ll be crowned King and bestowed the privilege of upgrading the castle, casting spells, and training units. Rule wisely, though, for your comrades seek to overthrow you from your lofty throne!

N-E: Defend Your Castle was always a fantastic pick-up-and-play game whenever boredom gnawed away at the mind, is this still the case or will there be more incentives for replayability?

Skye: Defend your Castle is still a fantastic cure for brief spouts of boredom and will really appeal to new and old casual players. However, game play has been significantly extended, and Heroic mode presents considerable challenging for even the most hardcore players. Multiple difficulty modes, multiple save slots and, of course, multiplayer, add substantial replay value. 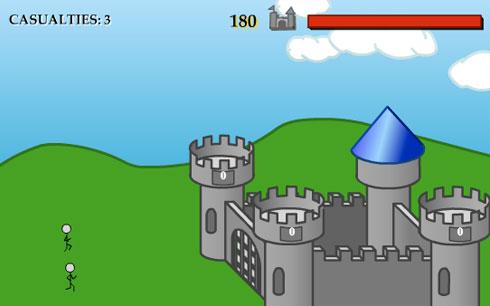 The original Defend Your Castle in all its mid-2000s free Flash game glory.

N-E: The WiiWare version of Defend Your Castle has seen quite a radical (but very stylish) change in the form of the new graphics. What caused the change from the simplistic stick drawings seen in the Flash version?

Taylor Shchaerer: When Skye first approached me with the idea of doing an entirely new version of Defend Your Castle, we joked around about seeing the clouds dangling from strings. I thought it would be funny if our whole game looked like it was literally held together by string, tape, and bubblegum. All joking aside, however, we were actually kind of serious about taking the art style in that direction; on some level, we recognised that if the idea alone was that entertaining to us, then producing a game with that idea could have the potential to be just as entertaining for anyone else.  Ultimately, we didn’t deliberate on the art style for this project; our first concept seemed to be a really natural fit for the game.  I made a few mock-up screens to elaborate on the vision I had in my head and from then on we just rolled with it.

Working with a small development team also gave me a lot of freedom to explore the idea and to take it in whatever creative direction that I felt I needed to pursue.  The majority of my inspiration for the graphics in this game came from my own personal childhood activities.  As a kid I used to draw superheroes and video game characters constantly, and whenever I had the time to do so I was “inventing” my own semi-playable video game systems constructed out of cardboard, paper, wheels, a lot of tape, and sometimes more ambitiously using only the red and blue pencils in the pencil crayon pack and a pair of red-blue 3D glasses from the bottom of a cereal box.  In tackling Defend Your Castle I wasn’t trying to re-create these old childhood projects, but I definitely made an effort to try to get into that head-space again.  I think anyone can understand the appeal in having limited supplies to work with and yet with a bit of ingenuity finding that you are by no means limited in what you can do with them.  It’s just a very liberating feeling to have such unrestrained imaginative control over your surroundings, and I think that as we get older we tend to lose that experience, so anything that can remind us of that feeling is something that will make people feel good.  I hope that in some small way the art direction for Defend Your Castle can achieve that.

Finally, as an artist and a musician, it’s important to me that we constantly test boundaries and try to break new ground in whatever our respective fields may be.  While there’s obviously a risk involved with deviating from the norm, I think it’s a risk that’s offset by a greater reward if successful.  And even if it doesn’t work out there’s always the chance that what is considered a failure today may turn out to be the seed of a thought that germinates into something truly astounding and ground-breaking tomorrow.  I’m just really passionate about pushing the limits, and that passion allowed me to jump headfirst into developing the unique visual aesthetic that we were trying to pursue with Defend Your Castle without any sort of reservation.

“It’s just a very liberating feeling to have such unrestrained imaginative control over your surroundings, and I think that as we get older we tend to lose that experience, so anything that can remind us of that feeling is something that will make people feel good.  I hope that in some small way the art direction for Defend Your Castle can achieve that.”

N-E: Are there any online functions in Defend Your Castle, such as leaderboards?

Skye Boyes: Not in the initial release.

N-E: What made you bring Defend Your Castle to WiiWare as opposed to the Xbox Live Arcade or the PlayStation Store?

Skye: The bash-em-up gameplay and unique throw mechanic are a perfect fit for the Wii Remote, which is even more intuitive and versatile than a mouse. We’ve factored in accelerometer data to allow an uninhibited flinging frenzy. There’s just no way to play Defend your Castle with an analog controller; grabbing invaders with the Wii Remote and flinging them sky-high is the way Defend your Castle was meant to be played! 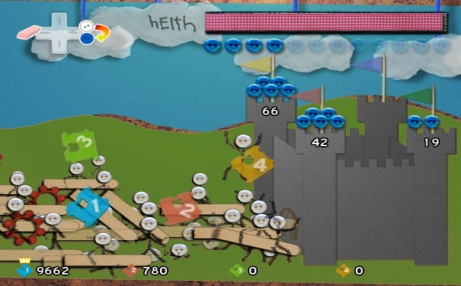 N-E: Nintendo seem to be going through the seven gates of Hell to avoid the release of a hard drive for the Wii, yet for people who download a lot of Virtual Console games, the limited system memory is swiftly depleting. Does Nintendo’s refusal to release a hard drive worry you, as your game may be overlooked by those looking to preserve their remaining megabytes of memory?

Skye: Good question; we’re hoping players will find Defend your Castle to be worth its weight in bytes. Additionally, there’s always the option of moving VC or WiiWare titles to an SD card for storage, or even re-downloading previously purchased titles from the shop channel.

N-E: When can we expect to see Defend Your Castle in Europe (even a rough estimate would be nice, as Nintendo remain tight-lipped on the subject of WiiWare in Europe)?

Skye: We have immediate plans to localize Defend your Castle for the European market; DyC should be available overseas shortly after WiiWare launch (although we can’t say exactly when that will be!).

N-E: Do you have any other titles planned for the WiiWare service? You have quite a plethora of popular IPs to choose from…

N-E: Who would win in a fight: Reggie or Shigeru Miyamoto?

Skye Boyes: Hahaha; Shiggy vs. The Regginator? Depends; Is it a cage match, or more of a lucha libre thing? Reggie’s all about kicking a$$ and taking names, but Shiggy’s been toning up in the pre-season with Wii Fit — I think it’s anyone’s match.